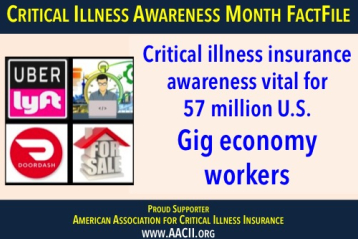 Individuals who are self-employed or part of the U.S. Gig economy need to understand their risks and planning options.

“There are 57 million U.S. gig workers who work either full-time or part-time and the Covid virus will only increase that number.”

“According to the Bureau of Labor projections, the percentage of Americans who are defined as gig economy workers will increase to 43% this year,” shares Jesse Slome, director of the national organization.  “There are 57 million U.S. gig workers who work either full-time or part-time and the Covid virus will only increase that number.”

“Gig economy workers depend on their ability to work in order to pay their rent or mortgage, to pay bills,” cites Slome.  “If they are unable to work, what will replace the loss of income?”

New research shows that 44 million workers, or 28 percent of the U.S. labor market were self-employed at some point during a given week in 2019.   “One study reported that 14 percent of U.S. workers said being an independent contractor was their primary job, ” Slome cites.  “Current estimates project two million Americans driving for Uber and Lyft.  Another two million are real estate agents.”

Far too few of these self-employed or gig workers have a Plan B to replace lost income resulting from an illness or a critical illness diagnosis.  To help educate more Americans, the Association has initiated an educational effort in conjunction with Critical Illness Awareness Month (October).   “Our research shows that a significant percentage of adults in their 40s and 50s have never heard about cancer insurance or critical illness insurance,” Slome notes.

Nearly two million Americans will be diagnosed with cancer this year.  “Breast cancer risk really starts when you reach your 40s and prostate cancer risk really begins when men turn 50,” the critical illness insurance expert explains.  According to the Critical Illness Insurance Cost Calculator, a cancer insurance policy that pays $10,000 upon diagnosis can cost less than $100 a year for someone in their mid-40s.

Two million American men and women will be diagnosed with cancer this year. “For women, breast cancer risk starts after you turn age 40. Men start to face increasing prostate cancer risk rafter they turn 50,” the critical illness insurance expert explains. According to the Critical Illness Insurance Cost Calculator, a cancer insurance policy that pays $10,000 upon diagnosis can cost less than $100 a year for someone in their mid-40s.

Our goal is simply to increase awareness of the risks and the planning options for those who depend on their ability to work to pay bills,” Slome explains. “The worst thing is hearing from people who’ve been diagnosed with cancer, calling us in financial despair,” he adds. “They tell us they never heard about these options and while it’s too late for them to obtain coverage, we want to make sure others are aware.”

Use the Association’s Cost Calculator to see an instant example of costs for $10,000 or cancer insurance protection. A cancer-only insurance policy like this would pay $10,000 as a lump-sum cash payment following a cancer diagnosis.