The American Association for Critical Illness Insurance was established in 2009.  The organization advocates for the importance of planning.  Because the financial risks associated with a cancer diagnosis, a heart attack or a stroke impact so many.  Therefore our mission is education of the consequences following any major critical illnesses that impact adults.

In 2008, two passionate industry leaders approached Jesse Slome with a proposal.  Slome had founded the American Association for Long-Term Care Insurance in 1998.  His efforts were proving effective in creating heightened consumer awareness.  The organization was also conducting successful regional and national conferences for insurance professionals.  Hence the hope was to duplicate this success.

One industry leader was Barry Eagle, (then) Vice President of Marketing for Gen Re LifeHealth.  The other was Ken Smith, (then) Director of Health Product Sales for Assurity Life Insurance Company.

They proposed Slome replicate his efforts for a little-known line of insurance, critical illness insurance.  Following several discussions, in 2009, Slome agreed and established the organization.  However, with no budget it was difficult to undertake many efforts.

That changed markedly  in 2019 thanks to the encouragement of senior executives focused on the ci industry.  They include Steve Rowley, formerly at Gen Re and now with Cigna insurance company, and Steve Woods, Vice President at Gen Re.  With their encouragement and support, Slome agreed to re-launch efforts to create heightened consumer awareness.  Similarly, a secondary goal of the Association would be supporting insurance agents who market critical illness insurance products.

Slome is recognized as one of the insurance industry’s leading marketers.  Previously he held senior marketing and sales positions with leading insurers including Aetna and Transamerica.

Before a career with insurers Slome was an award winning executive with several New York City-based public relations firms.  He is the recipient of two Silver Anvil awards.  The Silver Anvil is the top industry award.  Slome was awarded for being one of two people heading up the launch of the Cabbage Patch kids dolls.  Subsequently his second award was for his campaign linking Tang and Mothers Against Drunk Driving. 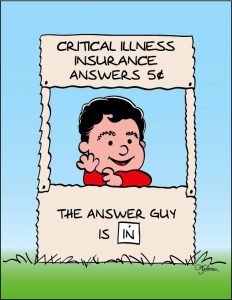 A key role of the Association is answering questions about critical illness insurance.

The organization gathers data from across the industry.

You can access information by visiting the Critical Illness Insurance News Archive.

Use the Contact form below to submit your questions to Jesse Slome, the Critical Illness Insurance Answer Guy.

Fill out the form to get in touch with us. We will reply as soon as possible.

Goals for the future growth of the industry